This post demonstrates how to send Complex client types to MVC using JSON. If you require the same information but for ASP.NET WebForms, you can go and read this post instead.

Note: I published an updated post for MVC6 and ASP.NET core here.

Background
Sending data to MVC using jQuery is something that I wrote about in several blog posts. Just as a quick reminder, this post discusses the basics of sending data, including simple-typed arrays. The problem is that I had to send over an array of complex-typed objects. Originally, this was intended to be a post which performs some sort of a work around by sending a JSON string to the server, and uses a JavaScriptSerializer & dynamics to retrieve the objects. But, after Googling some more it turns out by sending and receiving data in a certain way, MVC will perform this process out of the box, by binding the sent data to your custom server side classes. For simple types, sending data to the server is very “forgiving” and easy. But if you require to send complex types which involve JSON strings – you have to be more strict and follow “the rules”.

If you’re just into the solution, click here. If you would like to see some basic examples and the problem explained, read on.

Basic implementation
Here’s a reminder on how to send simple types, slightly complex types and simple typed arrays. First, this is the server side code:

And this is the client code (excluding the buttons html):

There are three examples here:

Note the traffic sent over to the server: ‘Simple’ (1) and ‘Complex’ (3) send the data exactly the same way, so clearly the server handles the sent data in a similar way. ‘Array’ (2) sends the data in duplicate keys which is received and interpreted by MVC as arrays.

This actually works (You can read about it here, under “JavaScript and AJAX Improvements”.

But… when I wanted to send an array of complex types, this was more of a problem. First, lets review the client code:

And here is how it is sent over by the browser:

Clearly, this is not what I wanted. OK, let’s try to remove the traditional flag from $.param:

Unfortunately “data” is just an object, nothing more, and I did not get what I wanted.

Solution
I Googled and found this post which gave me a good direction. Turns out that MVC will know how to parse your sent data from the client on the server side, but there are a few catches I had to overcome before this properly worked:

So after making a few changes to my code, here is the client side:

The above code ensures that Ajax calls sent to the server are with a JSON content-type, and that JSON is to be received from the server (you may choose to add more global jQuery Ajax settings here such as error handling, or POST method etc.).

Important: if you don’t need all of your Ajax calls to be in JSON format, you can simply use the dataType and contentType in explicit Ajax calls. Just replace $.post with $.ajax and use POST.

The code above converts the data into JSON format, and will require a ‘people’ property on the server side for binding purposes.

Below is the modified server side code. It receives a ‘data’ (not ‘people’ – remember?), performs binding to the different attributes, matching name to name and data type to data type. Properties and not global fields. 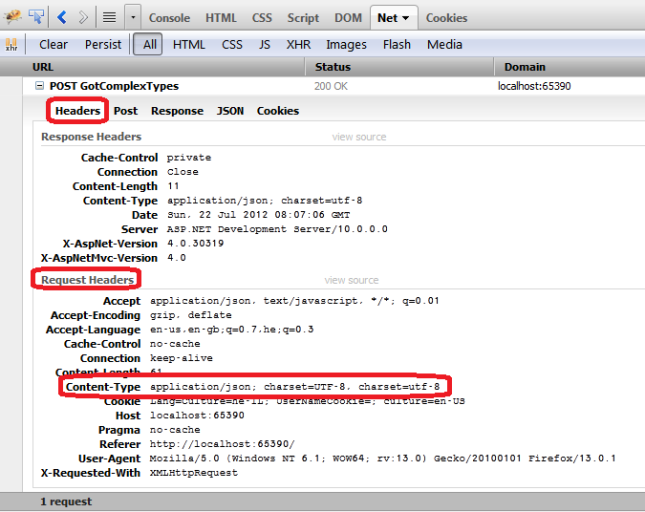 Summary
Apart for being a really cool feature, to be able to bind JSON strings to server side objects, it can save a lot of effort if you thought of doing so yourself. However, this was no picnic. If you don’t follow “the rules” specified above, expect a hard-time and lots of frustration. But don’t despair – it’s worthwhile once it works, and after the first time, its supposed to get much easier.